Just the tip of the exhaust system in the Intensa Emozione costs more than the BMW M4. I’ve heard everyone say it, the people of Apollo said it, full of pride; “so it costs more than an M4?”, the staff of Top Marques asked, as if looking for confirmation, full of surprise. The car costs 2,3 million euros and it is clearly aimed at people who own at least 10 or 12 other cars. And a private jet. And probably yacht. It is always relatively difficult to test and review these cars because they’re obviously conceived on a different level, for people whose lives I can’t even imagine. Well, actually I can, because Monaco is full of them. The point is with the way it looks, and they way it sounds, this car has no real competition because everything else is too mainstream, or too cheap or, if nothing else, looks a little tired. Which means the answer to the question “what’s it like” requires sitting down, and a cup of coffee, and a plethora of adjectives like “astonishing, astounding, breathtaking” and several other multisyllabic synonyms. Mind you, the answer to another obvious question, “should I buy it?”, is simple enough. If you can afford it, yes. Absolutely.

People are asking questions. The car is bathed in people. If it were a person, you would say it’s covered in people up to its ankles. It took several waiting minutes and patience and accuracy to take the pictures you see here, because there were always people around. And they were getting closer and leaning on it and taking pictures of it, and with it, so getting a clean shot was almost impossible. There’s a guy who’s asking “what is it?”, his accent betrays deep North American roots, he comes from the heart of America. “An Apollo Intensa Emozione”. I know he’s going to love the sound of it. “Ah, man, that sounds cool. It looks like a Batmobile”. Spot on.

It does look like a Batmobile. Carmakers (including supercars) usually introduce concept cars made of purple silk and orange peels but then they tune it down and the production version is made of steel and only comes in different shades of black or white. This is different. It has to be. It’s made entirely of carbon fibre and if you want to buy it (lucky bas**rd), this is what you get. A batmobile.

Ok this is where it gets boring if you’re not into cars. The IE has a 6.3 L naturally-aspirated V12 with 780 hp (791 PS or 769 BHP) and 759 nm of torque, coupled with a 6-speed dual-clutch sequential manual. It only weighs 1,2 tons which means the top speed is, in technical terms, outrageous, and 0-60 is, again in technical terms, effing fast (2,7s). Its aerodynamic abilities and downforce are incredible, the company says the car can corner up at up to 2.0 g and can generate more mass in downforce (1,350kg) than it actually weighs. This means that you could theoretically drive it upside down. Though I guess that given what it costs, owners won’t actually try this. 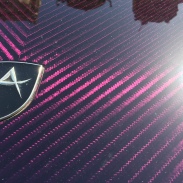 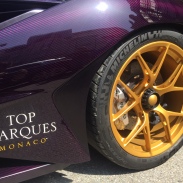 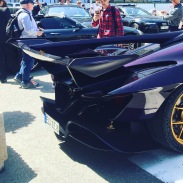 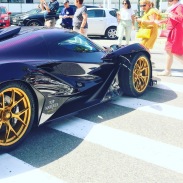 I’m going to bottom line it for you. This car is a cartoon, it is a comic book because it does a lot of things that normal cars don’t do. Everything about it feels like it’s coming from outer space. It’s a poster on a wall before it’s a car. And that’s what’s been missing recently. There are a lot of good cars out there, and a lot of truly great hypercars and supercars but the “WOW”, the “leave-you-speechless” factor is often missing, save for a few notable exceptions. And the Apollo Intensa Emozione (if you’re reading this anywhere that’s not Italy, please say the name out loud again and again to your friends) is an exception. It also did another thing, it redefined “carspotting”. Because this was parked in front of the Casino during the Top Marques and everyone was completely ignoring, and I mean it, absolutely anything else.