Finnish is impossible. In theory it has two distant relatives, Estonian and Hungarian, but in reality these three languages are different and complicated. Finnish is an agglutinated language (meaning that words are modified with suffixes depending on the role of the word in the sentence) and it has an unusual sing-song rhythm when spoken, which is generally never lost even when Finns speak other languages.

I’ve learnt a few words in Finnish and among them, after learning how to say hello, goodbye, beer and the usual stuff, I’ve learnt that the complete name of one of Nokian Tyres’ flagship product, Hakkapeliitta, comes from the eponymous Finnish cavalry (with King Gustavus Adolphus of Sweden) in the early 1600s.

I’ve also also learnt that the Finns use this as an exclamation, apparently repeated three times and followed by “oh!” to say cheers before drinking , as an alternative the other word they use “kippis”.

This was my second time in Finland and the bond between this cuntry and its weather conditions fascinates me. It feels like snow and ice are Finland’s natural declination. I come from a part of Europe where we don’t really do winter, temperatures go rarely below zero and it snows once a year, so this is new to me. Ice and snow and slush are trickier to handle because they’re very unpredictable so what you need is traction that proactively reacts to the conditions of the surface as you go along.

As a general rule, predictability equals safety when driving is involved which is why slush can sometimes be more difficult to tackle than hard snow or ice because, in these lands, snow and ice are the norm and so they’re prepared for it. Extreme conditions, yes, but kept under control. Something you can’t do with slush because it forms when ice or snow melts.

Nokian thought about that with their new WR snowproof tyre, specifically conceived for Western Europe because around here our winter, even when it is extreme, remains milder than in Scandinavia which, paradoxically, can be trickier because it means it is more difficult to predict what’s gonna happen.

This is the Audi RS5 which is based on the first series of the Audi A5* and I know this is supposed to be technical but look at it. It is, in my view, a very good looking car. Its simple, no-frills design is elegant and minimal, and it doesn’t age. I think you could call it Scandinavian. Even the RS5, with all its sporty details and added details, looks fresh out of a showroom. Now look at the header, total white against a total white backdrop. It does look stunning.

Anyway, let’s get down to business.

The RS5 has a 4.2 FSI V8 with 444 hp and 430 torques, which is a lot, especially on ice. In order to help you make good use of all that power and torque, Audi used a seven-speed S tronic transmission and quattro permanent all-wheel drive with crown-gear centre differential and electronic torque vectoring and servotronic steering.

It isn’t a slow car and, not being unburdened by the technicalities of modern motoring, the way it delivers speed and acceleration is different, more brutal than in a more modern RS5. You also have to factor in its weight, which is not inconsiderate, at 1,800 kg. 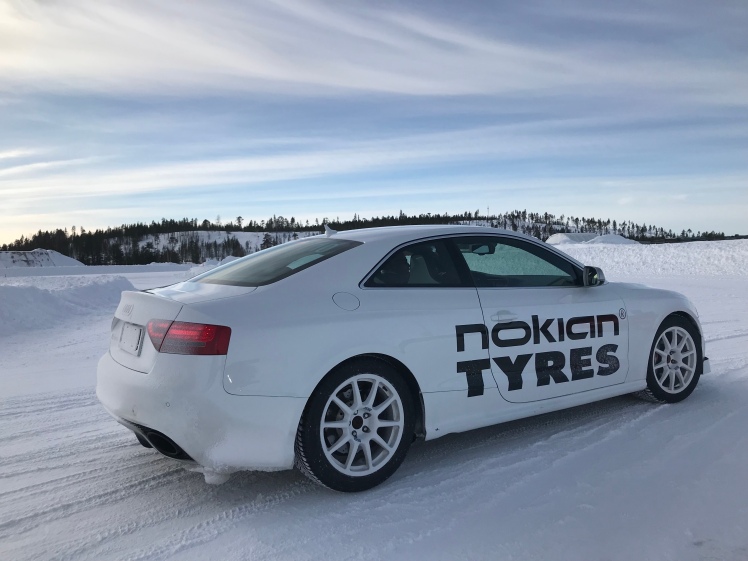 Around here, near the “White Hell”, the winter testing centre owned by Nokian near Ivalo in Finland, winter is the norm. There are around 200 days of freezing cold every year and the backdrop is always made of several shades of white and the roads are covered in hard snow.

Nokian invented the winter tyre in 1934 and opened “White Hell” in 1986. It covers over 700 hectares of land and there are 30 different test tracks including long straights with smooth ice, long straights with irregular ice (which is more similar to what you can actually find on real roads), ovals, racetracks and so and so forth. The list is a saga and it includes a wonderful drift track where you can pretend your name ends with -en and drive like a maniac. The Finns are very good at this, they’re exceptional drivers and, thanks to the tyres, you may fooled into thinking you are too. I was, but this is another story. I’ll get back to that in the next few days. 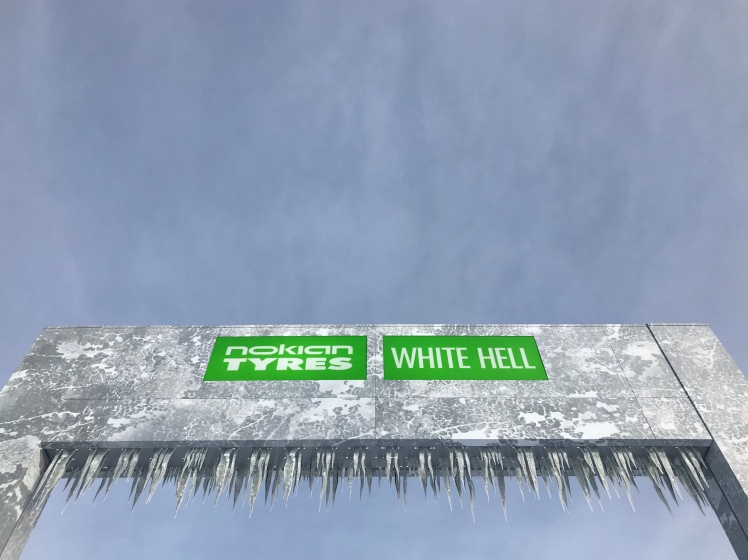 These tyres are tested endlessly, in different conditions (Nokian also runs tests in South Africa and Spain), to make sure they perform no matter what. There are over 20 different tread patterns and there are more options from the studded tyres to the summer tyres. These tyres in particular, the WR Snowproof, are designed with snow claws, to make sure you get the best possible grip with Western European winter snow (which is normally a little softer than it is in Lapland), brake boosters, to help you slow down under braking and they canals and the patters are cut very sharply, thus improving braking and lateral stability. The tread depth is 8.7 mm and it also has something called “silent sidewall technology”, a tread pattern specifically designed to minimize noise because grippy tyres on snow tend to make a racket.

And you need lateral stability around here because, if you decide you’re in the mood for a spot of hooliganism, you can turn the traction control off and drive on while looking at the road ahead through the passenger window.

These tests were varied and complex. In just one day, I’ve driven the 7th gen VW Golf on four different tyres, the Audi RS4 Typ 8E and the RS4 B8, several Audi Q5s, the Ford F150 Raptor, a 4th gen Golf specifically modified for snow rallying and a V6 Amarok so there’s more to come in the next few days.