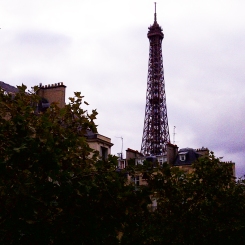 The first, admittedly questionable, truism is that it isn’t 100 % clear how Paris got its status of celebrity. It doesn’t deserve notoriety either. It’s like one of those weird-looking top models with an awkward nose, sallow face and grey eyes that get more work than their better looking peers.

Paris has had one of the most astonishing makeovers in the history of the world. Gone from slum, breeding famine and plague, to the world’s capital of style and desire in mere centuries. It was almost completely rebuilt after WWII and the duckling became swan, and while the poverty has long gone, some of the decay is still there.

It is perhaps not by accident that Paris is the home of fashion, but it is also the most revered, coveted and visited city in the world, and I’m not sure why.

Let’s start by stating what Paris actually is. Paris is beautiful, it is grand, it is magnificent, it is vast but not dispersive, it is full of art, it is varied, it is a place with a certain magic. That said, many other European cities are like that, and Rome is far more beautiful, London is far more vibrant, Tallinn is far more interesting, Barcelona is far more amusing and Amsterdam is far more entertaining. Hold on, I’m not finished. Copenhagen is a lot cleaner, there’s more art in Florence, more beauty in Budapest, and glamour? The Swedes are catching up. And fast.

Paris is a member, perhaps a founding one at that, of the 5-star club. It doesn’t matter which survey or report you’re looking at, Paris will always be up there in the top 5. Wealth, Competitiveness, Global Power, Economic Power.

This is the brochure. When you land and start moving, reality is a little bit different. Let’s carry on by stating what Paris actually is NOT. It isn’t that large, it is not tidy nor clean, it is not cheap, it is not welcoming and it is not / not full of Clochards. They are everywhere. They never write that in brochures, they didn’t tell you when you booked your flight or train. Paris is overflowing with homeless people. The French term is Clochard, but don’t let that sweeten the pill for you. If you associate the French capital city with romance and art and if your favourite foreign expression is Belle Epoque, the sight of some of these unlucky souls will be even more brutal. An innocent light glows in their eyes as they ask for a penny or, as often as not, alcohol. I know I said that before, but they are everywhere. And please take this expression verbatim. On the mini roundabout as you walk to Montmartre, on the floor in front of of the bank where you’re trying to withdraw some cash to have a coffee. They’ll be there too. Right alongside you as you’re sitting and enjoying one. Black, no sugar, no milk. They’re sitting on the pavement. I saw one lying on the concrete of a traffic island. He didn’t even have a carton box to lie on.

The sewers in Paris are famous. I do not know why exactly, but they are. Well, there are big grates that interrupt the cobblestone here and there, the air that comes out of the grates is warm and comes from the sewers. Clochards camp on them. Again, literally. They erect a tent, nestle in them, and lie on the grates to get some warmth. It is one of the most desperate things I’ve seen.

There are, apparently, thirty-five working hours in the Parisian week. And Parisian workers seem to spend the remaining 133 doing nothing. Ah, they’re good.

They are masters at doing nothing. They do it very well. Montmartre is an urban maze of cafes and restaurants and hangouts. A symphony of clinking teaspoons, tickling laughter, and steaming coffees. The streets are a cobbled sonata of horns and voices and music. My record is six hours and nine espressos. I’ve walked for six hours straight up Rue des Pyramides and then back to Montparnasse down Rue du Louvre, doing absolutely nothing, and thinking absolutely of nothing.

The fantastic thing with the real Paris is that it looks very little like the imaginary version of the city itself but feels exactly like it should, exactly what you expect. Even with the added tramps.

Apart from the bridges over Seine, the endless art, the endless cafes with woven chairs and metallic tables and the pretty waitresses, the museums, the monuments, the Tour Eiffel, the cathedrals, the metro stations and the haute couture; there are the smells. Peaches and thyme in the markets, orange and olives. Wet tarmac, mixtures of scents from the countless shops.

I’ve never, actively, tried to go to Paris. I’ve only been a few times and it happened, well, sort of by accident.

But there’s no other city in Europe, apart from my own and London, where I’ve walked more. I think I’ve only used public transport once.

And that’s a shame because the greatest sight that Paris has to offer are its rooftops.

Rooftops are accidental. Usually, they are just pragmatic and practical, they’re the last concern of every designer and architect. In some cities, rooftops are a nuisance, a commodity to accommodate mock plants, fancy bars and antennas.

Perhaps, this is why Paris is what it is. It’s managed to make an architectural nuisance the best view in the world.

They say that Paris is an explanation, and that everything is for sale in Paris, including truths and lies.

This, on the other hand, is the best-selling truth.

And you might as well pay a visit while stock lasts.

words and pictures by A.S.V.