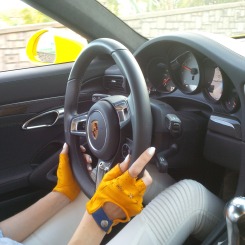 You read the title and it says Finnish Beauty, it says South of France and you know there’s a Porsche 911 Carrera S involved. So you may be surprised to know that I will start this by talking about Ringo Starr.

The fourth member of the “bugs” wakes up every day in a house the size of Liechtenstein, and he has been living in outrageous wealth for the last forty years or so because, yes you know it, he was the drummer of the Beatles. Which means that he’s sold more records than anyone else in the history of music and he holds, along with the other three members, several records (please pardon the pun) which are virtually unbeatable in the entertainment universe. So why did I mention him? Well, during an interview, someone pointed out to John Lennon that Ringo wasn’t exactly the best drummer in the world, to which Mr. Lennon replied, “Not the best drummer in the world? He’s not even the best drummer in the Beatles.”

Ringo is a member of the lucky club. The lottery winners. Then, on the other end of the scale, there’s me. I am fortunate, in that I was born in Italy, I have all limbs and I can spell, count and speak, but I am, and always have been, fantastically unlucky. In Monopoly, I go to jail and stay there; in Risiko, my goal is to conquer every single country in the world twice. I could place 10 individual ‘first-scorer’ bets on every single field player and it would be the goalkeeper to score first. In any game of chances, I’m dealt whichever card is the most useless. I’m the paper to your scissor, the scissor to your stone, the stone to your paper. I always, always lose.

Thankfully, because I’m such a disaster, I’ve devised some ways to cheat my way to success. At least when some games are involved. Which is how I’ve become a master at fuel light bingo, and which is why it is nearly impossible for you to win “odds or evens” if you’re playing against me. I can’t tell you my trick of course (which has to do psychology and algorithms), but I can tell you I’ve hardly lost a single game in like 4-5 years. Which is why I knew, with absolute certainty, that when I was offered to gamble the possibility to ride shotgun with Sara Näse, Federico didn’t stand a chance. He just didn’t know about it yet. I won, par for the course.

So there he was, crumpled, uncomfortable and bent in the backseat of a yellow Porsche 911 Carrera S and there I was, comfortable, happy and sated, pet-sitting Sara’s dog Mårran in the passenger seat while she was driving out of Monaco and on to Èze, across what’s arguably Europe’s most evocative (automotive speaking, anyway) place in Europe: the French Riviera. The South of France. The Côte d’Azur. I’ve sung endless praises to this part of the world and I’ve used a great deal of adjectives to describe this car. I’ve gone to the extreme edges of my thesauruses (thesauri? Thesaurus’?) and back and I’ve perused countless dictionaries in search of the perfect antonyms and synonyms. There’s only so much you can say without being prolix about the 911, which is arguably the world’s point of reference for sportscars; and the Principality of Monaco, which is just Heaven if you love cars.

So let’s concentrate on Sara. Sara is driving this yellow press 911 and she’s not being subtle nor gentle.

One of the risible misconceptions about the car world is in what non-car people think about the relationship between women and cars. I’ve met a lot of women who desperately, hysterically love cars and they don’t love them because they represent wealth or because the colour of the seat belts matches their latest purse or Jimmy Choo’s. No. Women that love cars mostly love them exactly for the same reason everyone else does. It’s because they’re bloody-effing fast and exciting.

In Monaco, Sara’s gear changes are a contradiction. Abrupt but smooth, brutal and clinic. People are watching and can scarcely believe what they’re seeing. What they’re seeing is a super-hot girl driving an extremely hot yellow Porsche while a random guy holding a little dog on his lap in the passenger seat. Locals and tourists in Monaco are not easily surprised at seeing weird automotive things because they’re used to it but this is probably something else for them as well.

She’s Finnish and she speaks English and Swedish, and a bit of German. For those who don’t speak it, including myself that is, Finnish is impossible. Technically, it only has two known relatives, Hungarian and Estonian, both languages with which it actually shares nothing other than the fact that they all sound Klingon. Swedish is a bit easier. Some people think it sounds like German, which it really doesn’t, but that’s not a stretch. Now I don’t speak Swedish but I do know the national anthem, yes, I don’t know why either. My dearest possession is my passport and my most prized asset is the tangle of moments I’ve lived in these automotive trips and tales. It keeps me going. That, and coffee. And so I don’t know what’s yours, but I have to say singing the Swedish anthem in a Yellow Porsche is up there with the best. And I’m glad she was driving anyway, ‘cause I’m probably the worst driver in the world.

Which is why I’ve driven the Abarth 124 quietly and carefully at Parco Valentino the other day. Whereas some other car writer, which doesn’t translate into racing driver, didn’t. And so he crashed. But that’s a different story.

photos and videos on location in Monte Carlo, Principality of Monaco – April 2016