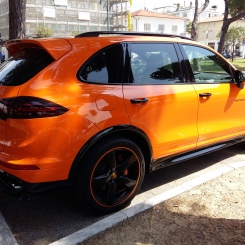 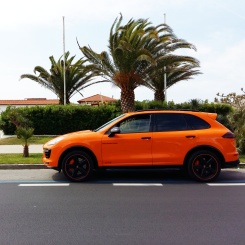 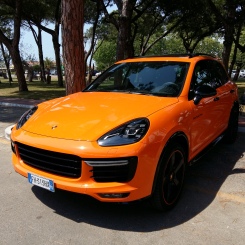 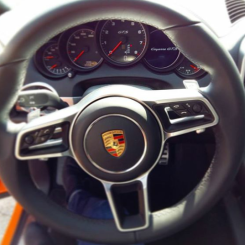 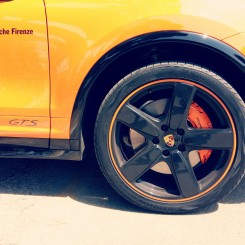 If you stop for a second and think about colours, and I’ll understand if you’re nodding off at this point, you’ll realize that the tone can be far important than shape, size and fit. And you think you choose your own colour but apparently you don’t, it chooses you. This extremely pointless and prolix introduction served only one purpose. Look at it. Behold, the orange Cayenne GTS.

Centro Porsche Firenze had arranged a few cars on the promenade of Forte dei Marmi in Tuscany and I had a choice, multiple actually, because there were a viper green Cayenne GTS, a Black 718 Boxster, a red Macan, a black 911 GTS and a silver Panamera, I could have a go in all of them and the first car I wanted to drive was the orange Cayenne. You know the Cayenne is fast, because it’s been around for a while, but this big orange cat is a lot quicker than you’d expect and, much like a cat, you can never predict what it’s gonna want to do next. One minute it is the most civilized car in the world and the next it just wants to bite you. It’s comfortable but it can be quick, and it goes like stink but it can cuddle you. It feels like a gentle giant who just woke up and is a little angry about something. Sounds like it, too.

Porsche fundamentally invented the SUV as we know it with the Cayenne, luxurious and sporty, and the Cayenne has got a lot better in time. It began as a raw project, a blueprint, now it’s a grown up car for boy racers who refuse to grow up because it’s very nice to drive. And I don’t mean nice to drive ‘for an SUV’, I mean nice to drive, full stop. This particular model you see in the picture has a 3,6 L twin turbo V6 with 440 BHP and promises 0-60 in just over 5 seconds, and it feels like it can deliver. 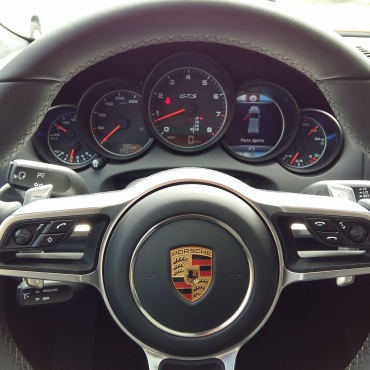 However, what I really loved about this Cayenne was the colour. It just wanted me to drive it and it looks, at my least to my eyes and especially surrounded by those palms, amazing.

Quite imposing at the back

I don’t know why you love cars, I don’t know what makes you vibrate over 2 tons of metal and fuel, and in fairness I honestly couldn’t recommend buying this car in this colour, you should have it in moonlight blue (which I’m told can’t be my favourite colour anymore) or perhaps purpurite. If you like cars, for any reason, you know there are more sensible versions of the Cayenne to buy, but you should be happy in the knowledge that if you were to win the lottery one day you could buy an orange SUV with 440 BHP. I am. And that’s exactly the reason that made fall in love with the automotive world in the first place.